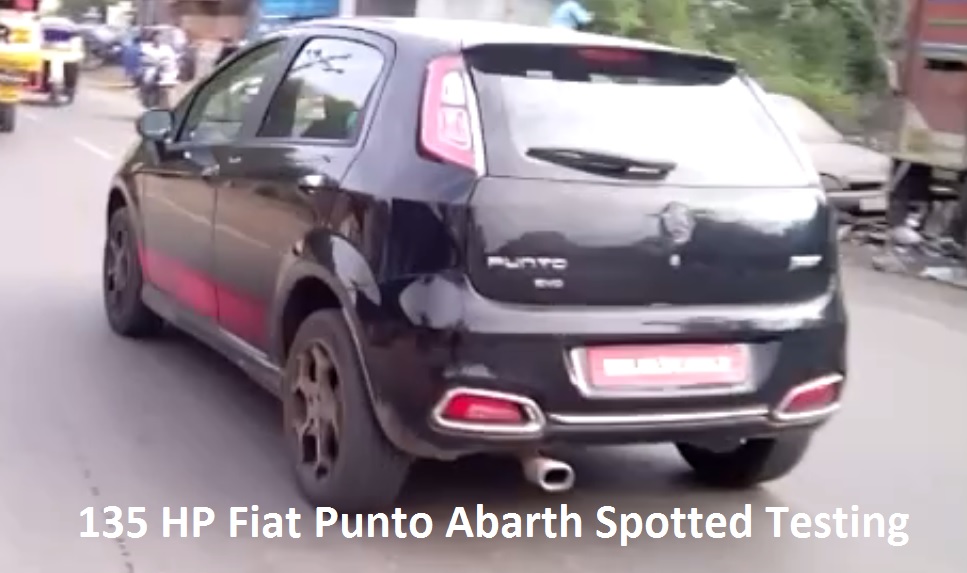 Yes, we have all been waiting for it and are excited about it ever since pictures of the car came out on the web for the first time. Punto Abarth, which has been the talk of the town all this while, was caught in a video by our Pune correspondent Savio Tavadia.

Barely a few days back, we have exclusive revealed that Avventura Abarth will come with a 135 hp 1.4 liter T-Jet petrol engine. And following suit, Punto Abarth is expected to be tuned with a similar power output as well from the same mill.

Unlike the Avventura, the Punto Abarth will be carrying the Abarth logo along with the famous scorpion claw styled alloy wheels. The doors will get a fancy red decal with Abarth gleaming in full glory. The rear boot cover clearly sports the T Jet badging although we expect the Fiat badging seen in the normal Punto Evo to be replaced by the Abarth logo in the production version.

Both the Avventura and Punto Evo Abarth will be manufactured at Fiat’s existing facility at Ranjangaon, and are expected to carry high levels of localisation to keep costs under check. The car(s) though will still carry a premium price tag and (Punto Evo Abarth) will be the most powerful hatchback in the country in its segment.

Its nearest rival Volkswagen Polo GT churns out a maximum power output of 105 PS and has a 7 speed DSG transmission. The Fiat, though not confirmed, can be expected to be mated to a manual transmission (we know all you aficionados are drooling!).