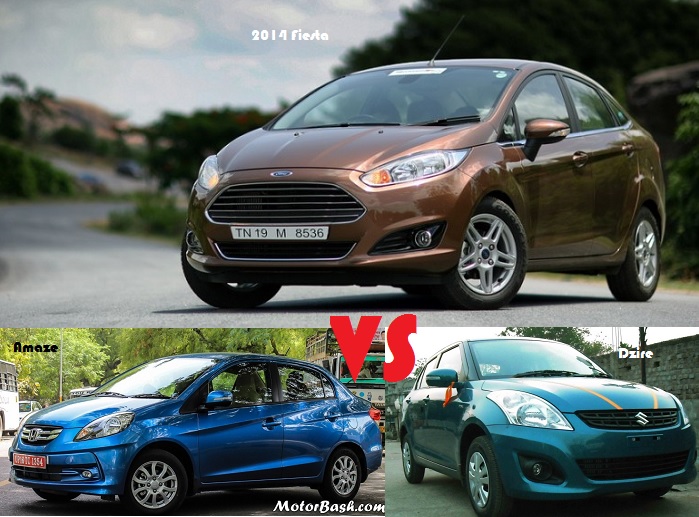 Ford has very recently launched the new 2014 Fiesta in India ironing out its biggest mistake – price! The new car comes at some real fantastic price points.

So far, we have compared it with all C2 segment cars as well as its own sibling EcoSport. However, its starting price tag of Rs 7.69 lakhs is precariously close to the top of the line entry compact C-segment sedans Amaze and Dzire. So, how about a quick comparo…

It doesn’t have the limitation of being a sub 4 meter car and hence it comes with the best boot space among the lot but with a larger wheelbase, it also has the longest turning radius. All of them get airbags but the Fiesta Ambiente only comes at the driver side whereas the other two get the passenger protection, in addition!

Apart from this, Fiesta also comes with better interiors and fattest 15 inch tyre but it is a regular steel wheel. On the fuel efficiency front, both Amaze and Fiesta are almost matched with rated FEs hovering over 25kmpl.

The whole point of this post is to let you know that if you are considering buying the top of the line Dzire or Amaze, the new 2014 Fiesta, which is a segment higher, is just a stone throw away!