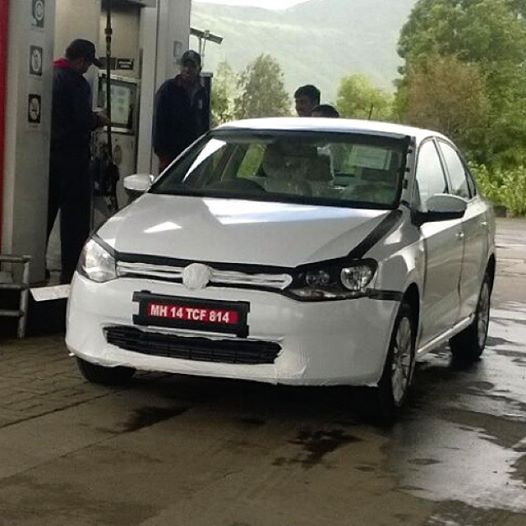 Volkswagen’s cheapest sedan in the country, the Vento is scheduled to get a mid-life facelift by the end of this year and this is known ever since the first news of the 1.5L diesel engine broke out.

New Polo facelift already runs on the same motor and its now time for Volkswagen to introduce it on the new Vento.

And these new spy shots from Topgear.com suggest that the company has started road testing the new facelifted Vento and a fair bit of chances of the company managing to squeeze this in around the festive season.

Even if it comes a little later, it will have to slug it out with the new Ciaz in addition to all what is already existing. The new Polo which was launched mid-July does give us a very good idea about how the new Vento would look like.

The Vento, like the new Polo is to get a refreshed front bumper with a new set of fog lamps. The redesigned head lamps cluster is similar to the new Polo and gives the car some sharper looks. It will also get new alloy wheels and new wheel covers for the steel wheels oN the lower variant as is the norm. The rear end might also get a similar treatment like the new Polo and there could possibly be some larger space for the registration plate.

Going by the new Polo, the Vento facelift may also get a new ‘sporty’ steering wheel and minor updates to the dashboard and overall interiors.

Top Gear further claims that this test mule sported DSG automatic gearbox, which gives a hint that the new Vento facelift may get an automatic transmission on the diesel engine as an option. At present the DSG box is available only with the 1.2L TSI petrol while the 1.6L diesel gets a 5 speed manual transmission.

As we said, the new Vento will get the new 1.5L diesel engine in the 105PS power trim which the Polo GT TDI already comes with. So, between all this fist fight, will you choose the Volkswagen or the Honda or Maruti Suzuki still makes the cut for you…?