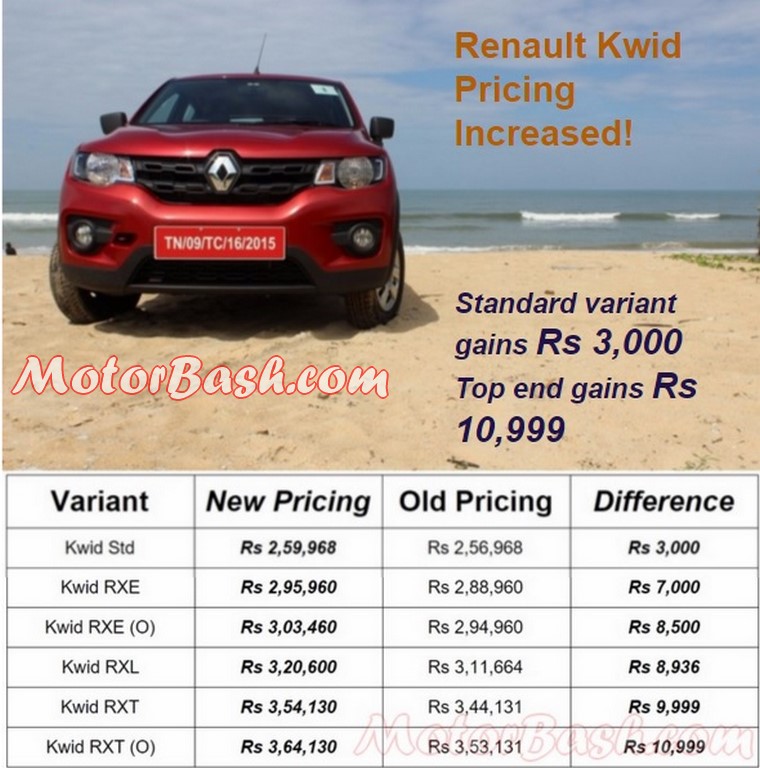 Renault Kwid was probably the launch of the last year. While we knew everything about the car thanks to the pre launch media drive, the only thing which alluded us was its price. And when the senior management announced it, everybody was awestruck at the aggression!

As expected, in the name of new year price increments (which are generally announced in December to push 2015 model sales), Renault has increased Kwid’s prices on all the variants. Price hike ranges from Rs 3000 to Rs 11,000 based on the variant. Kwid is now available at an entry price tag of Rs 2,59,968 spanning across till Rs 3,64,130.

Here are the new prices along with a comparison with the old!

This will result in an on-road price increase of approximately Rs 5000 to Rs 15,000 depending upon the variant you chose to buy. We are unsure what happens to those who have already booked their cars but in all probability, if you are one from that list, you will have to pay the new increased price. However, let us clarify that the old prices were ‘introductory’ and despite the hike Kwid remains one of the best offerings in the entry level car space.

Kwid is the first product of the CMF-A architecture and is powered by a 799 cc three pot petrol engine producing 54 PS of maximum power at 5,678 rpm and 72 Nm of peak torque at 4,386 rpm. It is also the country’s most fuel efficient petrol car with a rated fuel economy of 25.17 kmpl. If you are considering buying one, read our detailed first drive review.