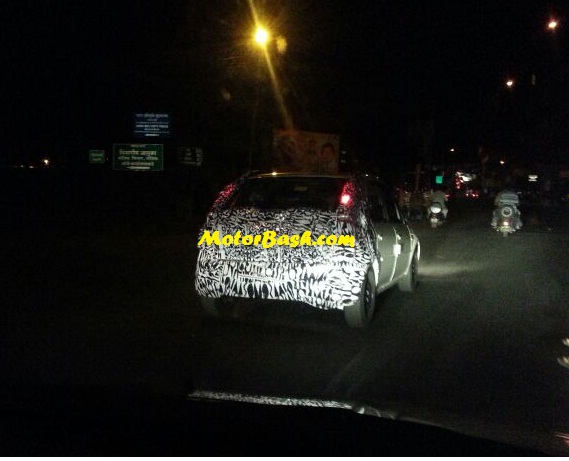 Ever since the first spyshots of Mahindra’s compact version of Verito made way on the online space, there is an inquisitiveness about how would have Mahindra pulled it off.

The car has been running completely camouflaged on roads. However, one of MotorBash’s avid reader Saurabh Kekre has snapped this pic of Verito running only with rear camouflage on roads. Interestingly, the first time he shared the pic, we mistook it for a Punto for a moment!

But upon generic inspection, its pretty evident that this is Mahindra Verito Compact. This car was caught at Nasik Pune highway and Saurabh also tells us that, of what he can make out in dark, the front resembled the current Verito. This mule also bears a new camouflage from Mahindra’s traditional zig-zags!

Many people are of the opinion that moving the tail lamp cluster higher up will make Verito CS look bad, but it doesn’t appear to be the case here. Mahindra Verito Compact is loosing its hiding bit by bit, and we expect to see a clear shot of its rear before its official launch.

Verito Compact will share the 1.5L diesel engine from the regular Verito and will go against the current and upcoming crop of sub 4 meter sedans in India. Mahindra will bank heavily on interior space and aggressive pricing to make Verito compact a success in India. Launch is expected to happen sometime soon.