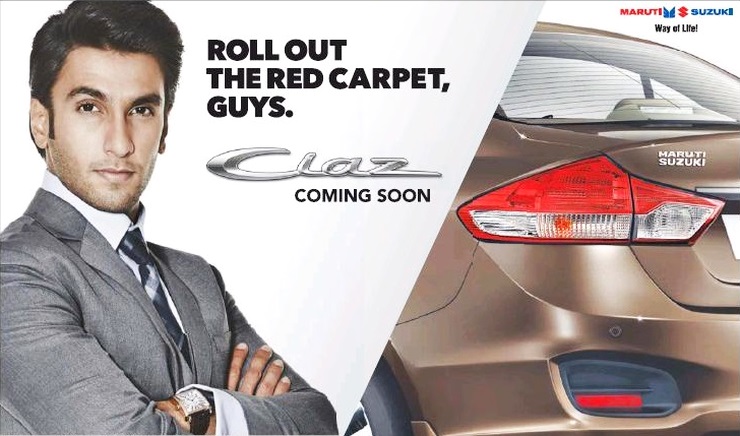 Maruti Suzuki’s Ciaz is being touted to be the next big thing in the C-segment in India and a possible threat to the segment leaders Honda City and Hyundai Verna. And Maruti is serious about this!

Signaling a launch soon, the company has started their advertisement campaign, shortly after the teaser website went online. The print ad for the car was seen in a few national newspapers in select cities, where actor Ranveer Singh was seen asking the readers to get ready for the Ciaz with a red carpet. The advertisement also features a sneak into the rear of the car which resembles a lot like the new Honda City.

Moreover, there are unofficial reports that Ciaz may be launched on September 25 and official bookings are expected to commence shortly.

The top of the line Ciaz ZXI/ZDI is expected to be fully loaded with automatic air con, push Start/Stop button, projector head lamps, a 5 inch infotainment system, parking assist and dual airbags. It is being rumored (and expected) that ABS will be offered in the Vxi+/VDi+ variants.

The 1.3L DDiS diesel in the 90PS trim and 1.4L K-series petrol will form the heart of the car. Though the engines are not really exciting but we hear that Maruti will be tweaking the petrol motor for a more zesty performance on the Ciaz.

So all you Lineas, Citys, Ventos, Vernas and Sunnys beware, because the cool cats are coming to town.