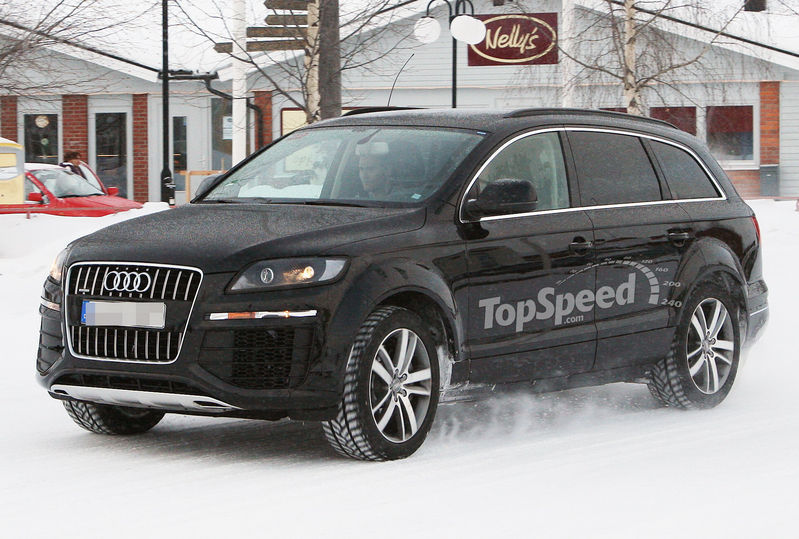 Are the German Automakers into facelifting and revising all at once? Recently we got the Next Gen S-Class and C-Class from Mercedes; New X5 and 3 Series from BMW and now we have Audi in the list!

A new avatar of the Audi Q7 has been caught testing on the thick layers of snow in Europe. From the spied photographs we identify it as the Q7 by observing those extra large air intake vents at the front bumper. The fenders are wider and look more muscular than its predecessor. The front overhang has been reduced. It is being said that the new Q7 might have gone through a diet and lose around 300-400 Kgs, thanks to the adoption of Carbonfibre and Aluminum materials and the new MLB Platform.

Audi’s interest in alternative fuels may results in an offering of Q7 Hybrid. Even if they fit this new beast with the existing 3.0 litre Petrol and Diesel engines, they’re supposed to consume lesser fuel and become more wallet and environment friendly, special thanks to the lighter weight.

It appears that the length of the exhaust pipes has been extended and they comes out from either side of the centrally mounted diffuser.

This new Q7 is supposed to face challenges from Porsche Cayenne and Volkswagen Touareg, as they have also been ‘slimmed’ and look splendid!