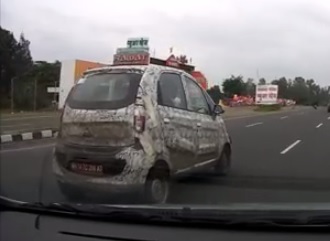 While Tata continues to try hard and present the Nano as a smart affordable city offering (and not a cheap 1 lakh rupee car), things have still not worked for them despite repeated plots. Cyrus Mistry has already given the Nano team a deadline to either make the brand perform or discontinue it completely and hence this appears to be the final but best-foot forward on the Nano – a bigger version with possibly a new name as well. Touted to be christened as Pelican or Nano Pelican (not sure if that is the codename or the final market name), the car has been spotted testing recently by YouTube user Ajeet Dhale.

Previous reports have suggested that the Nano Pelican will be bigger than the present version and will sport bigger wheels. It is difficult to ascertain if this mule has dimension differences but those wheels do look slightly broader and probably an inch bigger in dia. Looks can be changed anytime later as well, but what is more important is the engine -Going by what we see in the video (appened at the end), the car is definitely peppier than the current Nano which hints at the possibility of it sporting the speculated bigger 1.0-liter (petrol) engine.

Nano at present is powered by a tiny 624 cc twin-cylinder mill and churns out 38 PS of maximum power at 5,500 rpm and 51 Nm of peak torque at 4,000 rpm. Transmission options include a 4-speed manual and a 5-speed AMT unit which Tata calls as Easy Shift. The top speed is claimed to be 105 kmph whereas the spotter here mentions in the video that this mule was doing 120 kph ‘easily’.

We are almost convinced that a more powerful, bigger engine will find a home on the Pelican and let us hope the design is also changed comprehensively to give it a fresher placement. And yes, Tata please move that instrument console back where it belongs – right in front of the driver! We are not hopeful of a launch anytime soon since Tata already has products like Hexa, Nexon, Kite 5 lined up.

So expect Pelican to hit the streets only by the end of next year or early 2018.