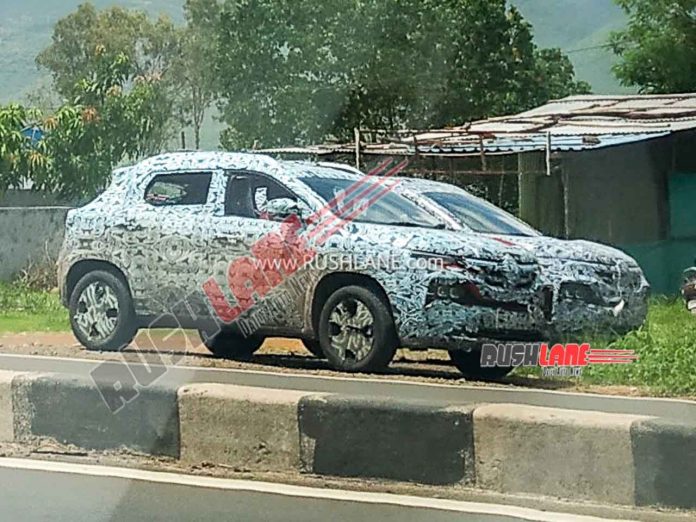 Renault Kiger launch expected in around three months ahead of the festive season. It will be one of the biggest launches of the year…

Renault has seen many peaks and troughs in its Indian journey. While the Duster, Kwid and new Triber have been quite popular, there have been a fairly long list of flops as well – which included the Scala and Pulse. The French auto maker recently discontinued its other SUV – Renault Captur, just after three years of its launch. The company managed to sell only 6,618 units of the car in its entire lifespan.

However, Renault is working on another exciting product as it aims to increase its market share in India. The upcoming compact SUV – Renault Kiger was recently spotted testing under heavy camouflage. The spy pics give a complete picture of the side view of the car.

Kiger, which is scheduled to be launched in the coming months (expected in October), will share its platform with the upcoming Nissan Magnite. Some key features of the car include an 8-inch touchscreen infotainment unit, push-button start/stop, steering mounted controls, digital instrument console, and more.

In addition to a naturally aspirated engine, Kiger will come with a 1.0-liter turbo petrol three-cylinder engine that is expected to produce around 100 bhp of peak power and about 160 Nm of max torque. In terms of the transmission system, the compact crossover will offer a choice between a 5-speed manual, 5-speed AMT, along with a CVT unit. We expect that the CVT option will be limited to only turbo-petrol variants, and it is likely to be a 6-speed unit.

Though the upcoming Kiger will rival the likes of Maruti Suzuki Vitara Brezza, Hyundai Venue and others but it is expected to undercut them. The competition in this segment will further heat up when the Kia Sonet and Nissan Magnite (unveil on 16th July) get launched.