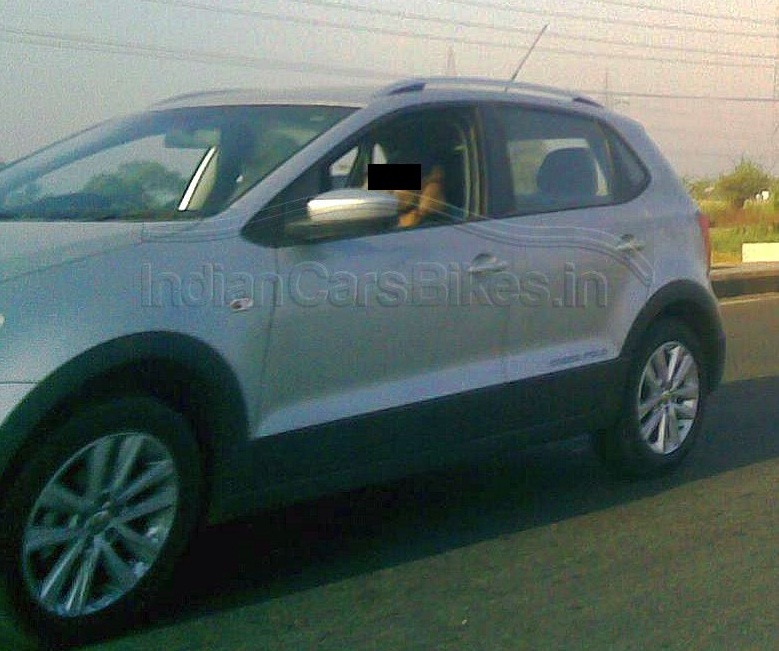 Although unclear, but here is the first ever spyshot of Volkswagen CrossPolo on the Indian soil. Shared by the folks at IndianCarsBikes.in, this car was caught near Volkswagen’s plant at Chakan in Pune.

We already know that Volkswagen has a number of variants planned for their Polo. The first one Polo GT TSI has already been launched with the 1.2L TSI Turbocharged petrol mill. The other three which remain are the Polo CNG, Polo GTD with Vento’s diesel mill and Cross Polo.

If you know about Skoda Fabia Scout, you will understand CrossPolo better. Though Fabia Scout is a big failure, Volkswagen must have their own reasons of believing in this Cross Polo for India. They must ensure CrossPolo doesn’t go the same way as the Scout. Similar to Scout, CrossPolo is a more masculine version of Polo with added capabilities of running on bad and uneven roads.

In international markets it gets additional body cladding, roof rails, muscular front and rear bumpers, bigger tyres, higher ground clearance and spruced up interiors. Of these, we can spot the roof rails, body cladding and the Cross Polo badge in this mule. However, due to the limitation of the only and unclear spyshot we have here, we can not make out more about the car.

At this time, we are absolutely unsure of what engine options will CrossPolo come with, but if we are asked, we will definitely want the newer 1.2L TSI motor to propel the car. Running the CrossPolo on the current underpowered 3 cylinder motors of the regular Polo will be plain discouraging!

This addition to Polo’s lineup doesn’t appear to be a master-stroke from the company considering that such kind of products haven’t clicked in India. Apart from that, we will already have products catering to this segment of the crowd in the form of EcoSport and others. Let’s see how Volkswagen can differentiate it and make it an interesting product for us. Meanwhile, we are already on a look out and hope to spot this car for some better quality spyshots along with more info.