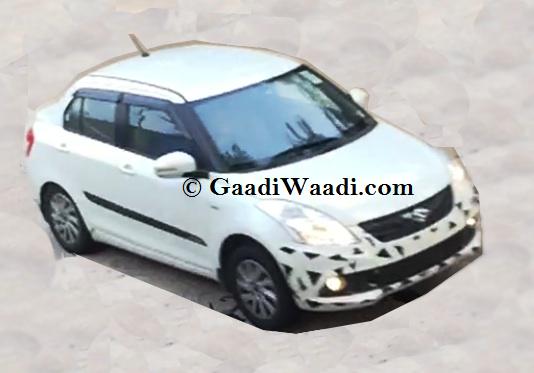 Maruti Suzuki has planned a real product offensive which started with their Celerio last year, and included the new Alto K10, Ciaz and the new Swift.

As you must have read, Maruti has at least 9 new car launches planned for 2015 and later. One of them is the all-important Dzire facelift which will be a minor niptuck job on the cosmetic front but may also see addition of some new features to equip the car face the increasing competition better.

A test mule of the new Dzire has been snapped by the folks at Gaadiwaadi, which is running with almost no camouflage. The changes, as we can notice, are the new front grille, a wider air dam, new fog lamp assembly and redesigned front bumper. There may be a few minor touch-ups at the rear as well.

But more importantly, the new Dzire facelift is expected to get the features & equipments of new Swift as well as the new engine tunes which take the fuel efficiency figures significantly higher. Power and torque from the same set of 1.2L K-Series petrol and 1.3L DDIS engines are expected to remain the same.

With time, Maruti Dzire has seen increase in competition with players like Xcent, Zest and Amaze and Ford will follow up this year with their next-gen Figo based sedan sometime towards the middle of the year, which, to us, looks set to gatecrash the party and someone is gonna get a hurt… Launch is expected towards the middle of the year or earlier!

Related: 3rd Gen WagonR Launch in 2017: Will Get 7-Seater Version as Well