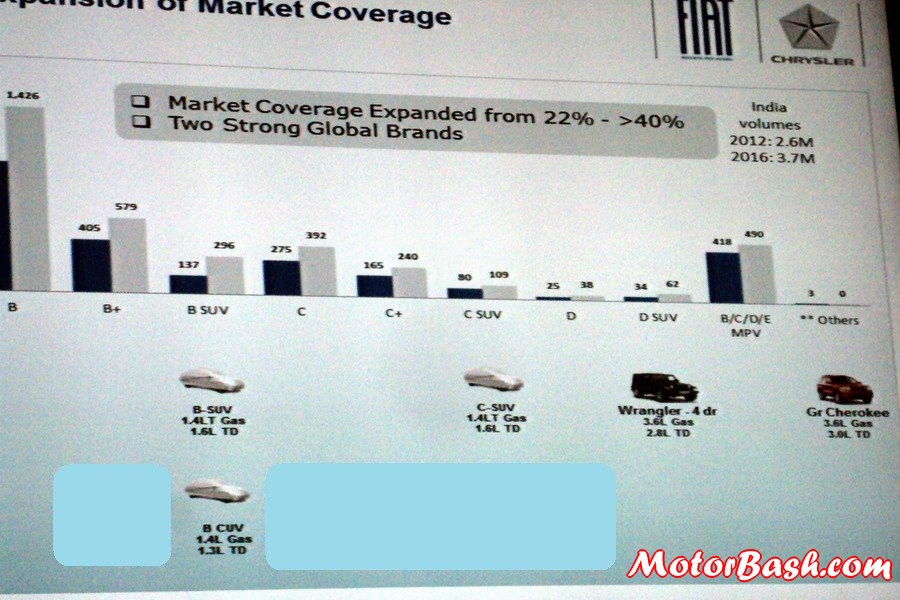 Everyday we have been carrying out one article on Fiat and Jeep’s future roadmap in India revealing bit by bit so that all the important info percolates in about Fiat’s Indian plans.

So far, we have talked about the complete upcoming lineup of both Fiat and Jeep and have now shifted focus on the engines that would power them. We shared with you that Jeep’s 2015 B-Segment SUV will sport a 1.4L and 1.3L turbocharged petrol and diesel mills respectively which it will share with its C-segment bigger sibling which will come later.

Yesterday we talked about the first Jeeps which will hit India this year – Wrangler will come with a 3.6L Turbo Petrol and 2.8L Turbo diesel engine whereas Grand Cherokee will share the 3.6L petrol mill along with a 3.0L turbocharged diesel.

Now, we turn our attention to the car that will be the most important product in Fiat India’s lineup – B-segment CUV. This is the fastest growing segment in India with products like Renault Duster and Mahindra Quanto registering massive success and a slew of similar products lined up.

Fiat’s compact crossover utility vehicle will share current Fiat’s 1.4L petrol mill which does duty on the normal Linea. It will not be the turbo-charged version from T-Jet and will produce power output of around 90PS and and torque of 115Nm. The ubiquitous 1.3L Multijet will do duty on the diesel version and we expect the 90hp/209Nm guise to make play.

This is both – good and bad! Bad because this might mean that Fiat’s CUV will not be extremely competitively priced and good because it will be a proper crossover and not a miser in internal space and external looks.

Aren’t things getting interesting as new details about Fiat’s new products are pouring in? However, the big question remains – which crossover will this be?

1 thought on “Fiat’s EcoSport Rivaling CUV Might NOT Be a Sub 4 Meter Car; Engines Revealed”