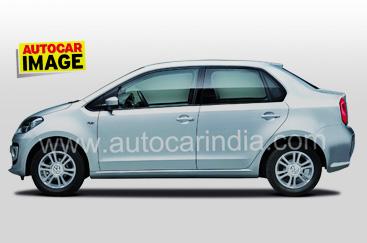 If the government doesn’t put a sock on this sub 4-meter ruling, we Indians would be forced to drive some of the most asymmetrical and ugly machines on this planet like this one!

Many international manufacturers are loathe developing a specific car that fits inside the 4-meter ruler and what they end up doing is chopping the bum off one of their over 4-meter cars..the end results are sometimes really drastic….

In what is turning out to be an interesting development and which we do not generally see quite often, the word is out that Volkswagen is developing a compact sedan specifically for India, which would be under 4 meters in length to qualify for the small car excise duty. We have been watching Volkswagen sharpening and picking up the axe and we fear it is going to be the poor old Vento that’s going to get it in the posterior. If that happens, it will be a bad news, since Vento, in its full form, looks a very well proportioned car.

Autocar has already talked about it earlier and now they have some newer twisting tales to this story. In an updated latest article they say, Volkswagen also has, under the radar, Up-based compact sedan in plans for our markets. We have already shared with you exclusive spyshots of Up! hatch being tested in India (check them here). However, based on various internal findings and analysis, only one of them will make it to our markets.

One wonders what’s possibly cooking there at VW. They can’t just chop up the Vento and leave the existing engine in it untouched. The new 1500cc diesel engine, which is under development is touted to make its Indian debut on Polo facelift early in 2014. This is the same engine that is being speculated to do duty on Volkswagen’s new compact. If they, however, use other platform, out of the Up city car, they may face problems of fitting the engines to the limited space.

Because of the lesser excise duty and consequently cheaper on road price, compact sedan market has been doing insanely good in our country. But it is a hard nut to crack for the manufacturers. It would be interesting to see how VW defines the compact saloon in German. We have already seen Amaze and Dzire do it for Honda and Maruti successfully.

Considering that Vento compact sedan will not really make much of a sense for India (considering Polo is already pretty long), we are very sceptical of it making it to our shores. But Autocar is pretty confident and they claim that Volkswagen is clear that they want the best compact sedan making it out to the Indian market under their brand logo. A one based on Up! is what we believe it will and should be…

Do you echo our thoughts? Before answering do check out the speculative rendering Autocar has shared above!

Also Check Vento CNG’s conclusive spyshots that are exclusive with us, here